A little more about Julia and her experience. 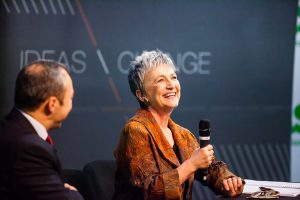 She was a member of the Housing Corporation Board for 10 years and a Charity Commissioner from 1998-2003. She chaired the Refugee Council in the late 1990s.  Julia was also Deputy Chair of the Food Standards Agency and worked as an independent consultant, for 15 years, operating within government and the voluntary and corporate sectors. She has researched and written extensively on issues relating to philanthropy, the voluntary sector, and its relationship with government and has written several books, the most recent of which is entitled “Why Fight Poverty?” which was published in November 2013. In November 218 a report on her work as a fellow of Carnegie UK Trust was published

She chairs the Independent Inquiry on the Future of Civil Society which reported in November 2018.

She has Honorary Doctorates from York St John University, the University of South Wales and from the University of Bristol. In 2010 Julia was given the Outstanding Leadership Award in the Charity Awards and was awarded a Fellowship of the City and Guilds of London Institute in June 2012. In May  2019 she received a Lifetime Achievement Award from the CMI. She was awarded a DBE in the 2020 new years Honours.